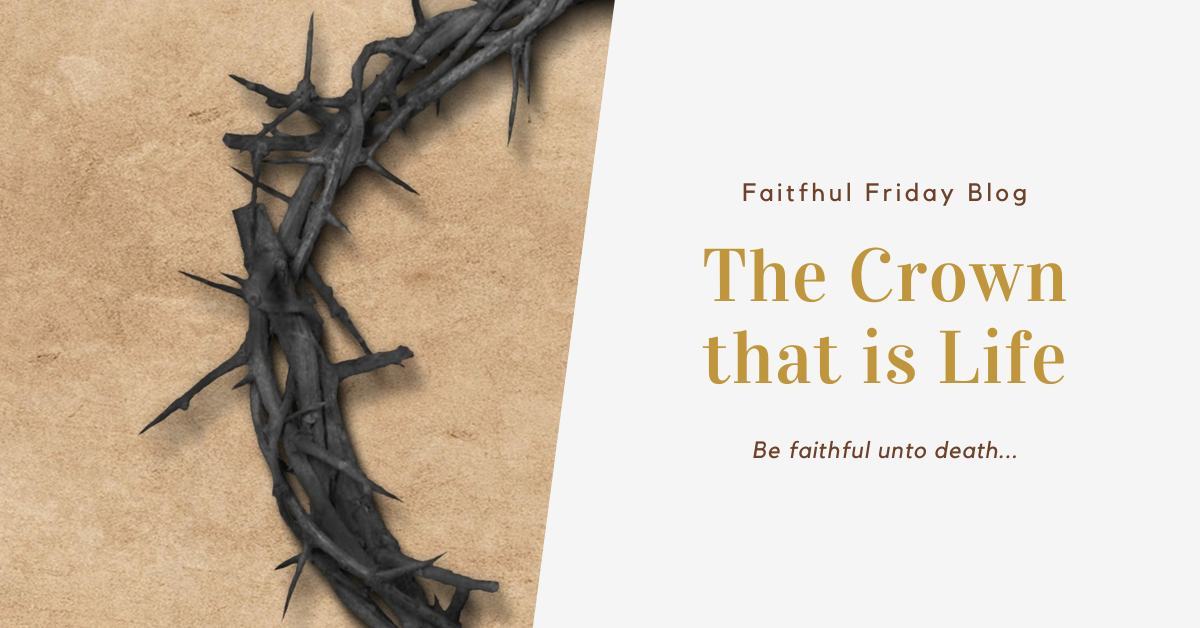 The crown that is life

8 “And to the angel of the church in Smyrna write: ‘The words of the first and the last, who died and came to life.

9 “‘I know your tribulation and your poverty (but you are rich) and the slander of those who say that they are Jews and are not but are a synagogue of Satan.

10 Do not fear what you are about to suffer. Behold, the devil is about to throw some of you into prison, that you may be tested, and for ten days you will have tribulation. Be faithful unto death, and I will give you the crown of life.

11 He who has an ear, let him hear what the Spirit says to the churches. The one who conquers will not be hurt by the second death.’

I know the pressure you face to forsake me. I know that you are poor to the point of beggary. I know you are falsely accused by ethnic Jews who have set themselves in opposition to me. I also know you are rich in faith. I know despite the pressure, the poverty, and the slander you remain faithful to me.

He also commands them to not fear what they are about to suffer. The devil will use the ethnic Jews and the Romans to throw some of you in prison where you will be tested for a set amount of time but be faithful even unto death, and I will give you the crown that is life.

He closes by calling them to hear what the Spirit says to the churches and he makes a promise. He promises that to the one who conquers he will not be hurt in any way by the second death. The one who remains faithful will suffer no harm at the judgement seat of Christ.

These four paragraphs are a brief summary of what is found in Revelation 2:8-11, but I hope they help us draw several implications from the text.

2) Jesus is the one who died and came to life.  He suffered and died at the hands of the same groups of people (ethnic Jews and Romans) under which the Christians in Smyrna suffer. He conquered death and now commands them to not be afraid of the imprisonment and suffering they will face even when it leads to their deaths. He commands them to not fear what is fearful. They were not allowed to fear imprisonment and death. We are not allowed to fear what is fearful.  Jesus knows what we may be suffering, and he knows what tribulation is coming our way…and his word to us today is “Do not fear. Be faithful unto death, and I will give you the crown that is eternal life.”

3) The promise of Christ to his Church in Smyrna is that if they remain faithful even unto death, he will give them eternal life, and they will not be hurt by the second death. The reward for faithfulness is Christ himself. It is the crown that is life. It is no harm at the second death. Even if you die for the name of Christ you will suffer no harm at the judgement.

Christian, Jesus knows your circumstances. He ordained them and what he calls you to is faithfulness to him through the circumstances, even if that means death. The conqueror’s reward? Jesus himself.

May we all heed what the Spirit says to the churches.