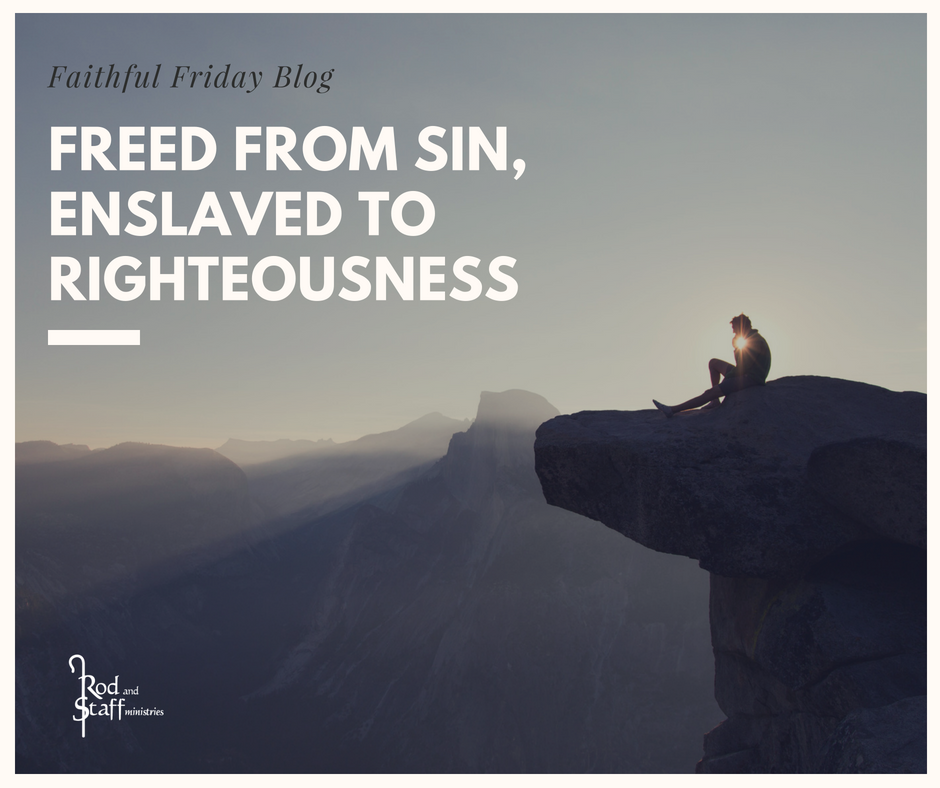 Freed from Sin, Enslaved to Righteousness

John Murray, in his book Redemption Accomplished and Applied, writes of sanctification,

This deliverance from the power of sin secured by union with Christ and from the defilement of sin secured by regeneration does not eliminate all sin from the heart and life of the believer. There is still indwelling sin (cf. Rom. 6:20; 7:14-25; 1 John 1:8; 2;1). The believer is not yet so conformed to the image of Christ that he is holy, harmless, undefiled, and separate from sinners.  Sanctification is concerned precisely with this fact and it has as its aim the elimination of all sin and complete conformation to the image of God’s own Son, to be holy as the Lord is holy.

If we take the concept of entire sanctification seriously we are shut up to the conclusion that it will not be realized until the body of our humiliation will be transformed into the likeness of the body of Christ’s glory, when the corruptible will put on incorruption and the mortal will put on immortality (Phil. 3:21; 1 Cor. 15:54).

We must appreciate the gravity of that which sanctification is concerned.

He goes on to list three items to be considered in regard to what he has just stated about sanctification.

We will now briefly consider each item in turn.

1. All sin in the believer is the contradiction of God’s holiness.

All sin, not just those we may consider particularly gross, in the believer is a contradiction of God’s holiness.  Believers are indwelt by the Holy Spirit, so even the tiniest of sins contradicts that reality.  1 John 1:6-8 speaks to this fact.  If a believer professes to have fellowship with God, he cannot then walk in the darkness. 1 John 2:1 indicates that John writes in order to keep the believer from sinning.  Later in verses 3-6, John continues with the idea mentioned in 1:6-8. One knows he has come to know God if he keeps God’s commands. According to verse 6, “whoever says he abides in him [God] ought to walk in the same way in which he walked.” The believer should desire and do as Christ did.  Therefore, any sin in the believer is at odds with God’s holiness.

2. The presences of sin in the believer involves conflict in his heart and life.

Matthew 5:48 commands the believer to be perfect as his heavenly Father is perfect. Therefore, any indwelling sin should produce conflict in the heart and life of the believer.  Indwelling sin is at war with the new affections produced by regeneration.  What the believer once desired he no longer desires but those sinful desires die hard.  His new affections fight to take control and to produce new actions.  When the believer comes face to face with doing what he always does or doing what he now knows he should do there will be conflict.  Will he please God or self? This choice is made repeatedly every second of the day.

3. There must be a constant and increasing appreciation that though sin still remains it does not have the mastery.

Indwelling sin remains but it is no longer the unrelenting task master. Its power has been broken and it can now only harass the believer. Romans 6 teaches this very truth.  Verse 6 tells us that the old self was crucified with Christ in order that the body of sin might be brought to nothing, that we would no longer be slaves to sin.  The believer’s union with Christ creates an entirely new power structure with Christ as King.  Those once enslaved to sin are now slaves to righteousness.

Much more good obviously be said about this matter but let what has been said sink deep into your soul.

I will leave you with one final quote from Murray.

It is the concern of sanctification that sin be more and more mortified and holiness ingenerated and cultivated.

Are you fighting to mortify sin and cultivate holiness?