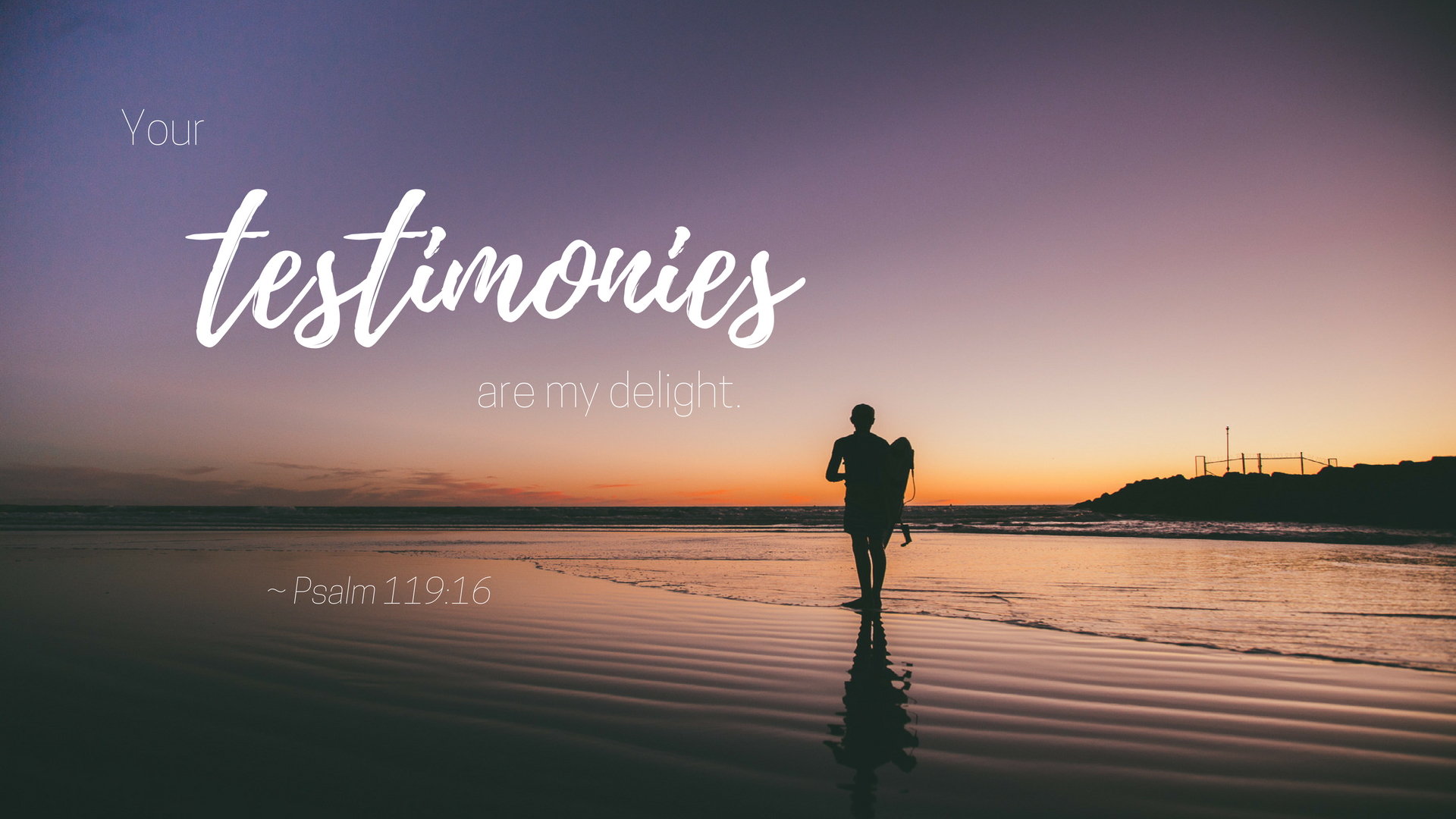 Your Testimonies are My Delight

In today’s blog we will continue to contemplate the words of the psalmist in Psalm 119. Consider verses 17-24.

17 Deal bountifully with your servant, that I may live and keep your word.
18 Open my eyes, that I may behold wondrous things out of your law.
19 I am a sojourner on the earth; hide not your commandments from me!
20 My soul is consumed with longing for your rules at all times.
21 You rebuke the insolent, accursed ones, who wander from your commandments.
22 Take away from me scorn and contempt, for I have kept your testimonies.
23 Even though princes sit plotting against me, your servant will meditate on your statutes.
24 Your testimonies are my delight; they are my counselors.
(Ps. 119:17-24 ESV)

In the first verse we find a prayer of request and recognition.  The psalmist requests that God deal bountifully with his servant and at the same time recognizes that the Lord’s dealing with him bountifully results in life, but not just any life. It is a life devoted to God. A life given to the keeping of God’s word. A life that is centered on God. A life with a God-ward orientation in all things.

The psalmist goes on to recognize his position as a sojourner on earth. He is one passing through to his eternal home.  This earth is not his home. He is but an exile and as such he requests that God not hide from him the guidance of his word.  As one traveling through a strange land the psalmist recognizes his need for God’s commandments and requests that they not be hidden.

In verse 20 the psalmist expresses the state of his soul.  It is consumed with longing for the rules of God but notice it is not a temporary flash in the pan type of consuming.  It is at all times.  He longs for God. He is consumed with knowing God’s commands.

Verse 21 reveals God’s response to those who reject his commandments.  The proud, insolent sinner who sees no need for God’s wisdom is rebuked by the Most High and considered to be accursed.  Those who wander from God’s commands will receive God’s rebuke.

The psalmist request that scorn and contempt be removed from him due to his keeping God’s testimonies.  It is often the lot of those who follow God to be on the receiving end of scornful remarks.  Following the testimonies of God, places one at odds with the world, with those who see no need for God or his word.

So, does any of what the psalmist wrote resonate with your soul? Is your life one that is centered around God? Do you understand that your natural state is blindness and were it not for God’s opening your eyes you would still hate his law? He has opened our eyes that we would see wondrous things our of his law, that we would delight in it and cherish it. Are you dependent upon God’s revelation?  Do you recognize that without God’s commandments you are a wandering sojourner left to yourself?

Friends, I exhort you to delight in the testimonies of God and to receive their wise counsel.